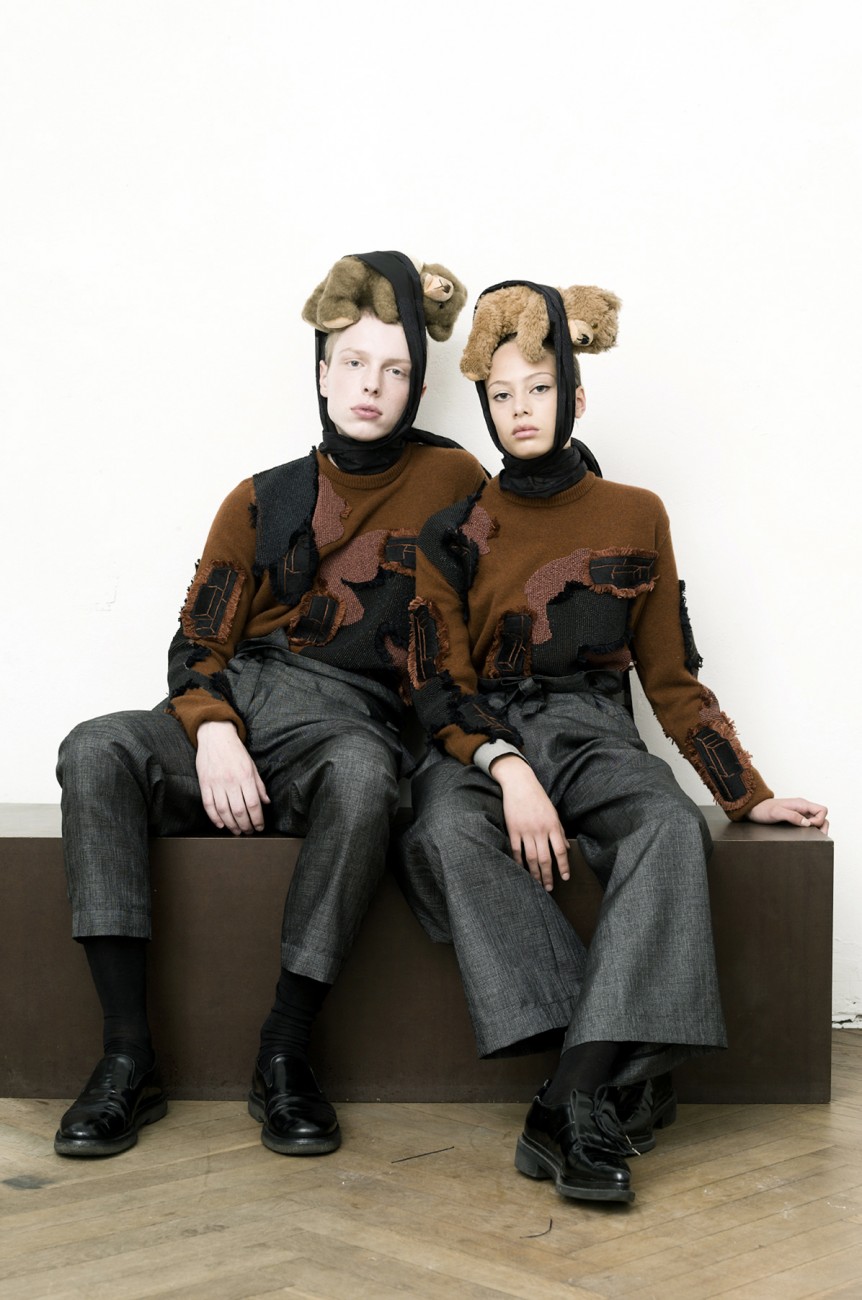 Love and life are the central themes to young designer duo Richert Beil’s latest collection, aptly entitled Love Series. The collection itself is rooted in the subject of love, taking us down memory lane and exploring the beauty of aged attachment. With the swiftness of daily life in mind, Jale Richert and Michele Beil takes a cautious step back in order to create something new.

Both designers founded their namesake brand in 2014, after finishing their MA degrees at ESMOD in Berlin. As a couple, they’ve been working and living together since 2009 creating women and menswear, which constantly stay in relation to one another. Their designs are tailored for each gender, but appeal as one look. Having been moved by the stories of elderly people, the couple sought to create a collection based on it. The result is Love Series – a simple way of retelling an old story through garments.

Who or what inspired you to portray couples and their love stories?

Jale: If there are subjects, who are interesting to us – and there is constantly something interesting – we spend a lot of time thinking about this topic. That’s why we subdivide our collections into different projects. With every collection or with every little special edition, we want to tell something new.

Michele: Actually, it is always about the stories we want to tell.

Jale: With the elderly people, we were interested in listening to another generation. Today it’s completely different. With Tinder everything is much faster and more uncomplicated. We actually thought it would be a little bit more romantic, but at the end it was such a real and honest project. We really heard the full life stories of the people and not just the good days. They lived in wartime and some of them had to even live in bunkers. They were separated in between and they succeed to stay together. That’s why we were so interested in getting to know the story of those couples.

How did you get to know the couples? Did you meet them and ask them to talk about their love story?

Michele: Jale’s father is a priest and he gets in touch with a lot of older people and accordingly he was able to help us find the right people.

Jale: We also posted a lot of flyers in Berlin, but unfortunately nobody messaged us. I guess they didn’t dare to because they didn’t know what the project actually was about. Although we just wanted to get to know another perception of an entire life that two people spend together (laughs).

Michele: At the end, we had five couples or even more, but just three of them agreed to take photographs.

Jale: We as young people love older faces, which have wrinkles where you can see the transformation. We find that really interesting. But older people don’t like the fact that they look older now and they don’t see the aesthetics in it.

Is it more difficult to portray a true story of two existing people throughout your clothes, rather than just a fictional one?

Jale: I think it’s another approach on particular things. You can also tell fictitious stories or look for inspiration in a more fantasy direction, but it was really important for us to stay with the reality so the project could be more authentic and pure. Essentially, it was easier for us.

Michele: Right from the beginning we knew that we wanted to highlight a special symbolism behind each story. I guess that’s why it was easier for us.

Did you figure out the symbolism of each couple right away?

Michele: Yes, because most of the symbols were always the crux of their love story. For example, where they met, moments which were really important for them or as well, some funny stories which inspired us. One couple told us about their wedding night. They heated up some bricks and put them under their bed, because that night was really freezing and the hot bricks warmed them up.

Jale: Sometimes there were even several symbols, which we considered, we tried to concentrate, first of all, upon the house motif, because their own house was in all stories very succinct. It showed that people were really down-to-earth, took responsibility and took care of their family. One couple talked a lot about their house. It was the midpoint in their life. They actually didn’t talk about themselves, just about their home. The time they spend and also all the things they experienced there were all really important for them.

How did the couples react when you told them that you want to create something out of their own story? What did they say when they saw the results?

Michele: We didn’t have a real reaction to it.

Jale: Yes, of course! They loved it!

Michele: Yes sure, they liked it, but they didn’t say in what way they liked the sweaters.

Jale: I guess they couldn’t do anything with the fashionable aspect, but they loved the fact, that they were in the public eye. The couples who didn’t want to take pictures at the beginning, got more and more interested in the project and at the end they wanted to see the other pictures (laughs).

Were the couples surprised that their story is still interesting?

Michele: Yes! They were really excited about it. Some prepared little cards, so they didn’t forget what they wanted to tell us.

Jale: That was so cute! They absolutely loved the project also because they could talk about their stories again and people would actually listen to it and still find it interesting. In the end it was even more special than we thought it would be.

Michele: We also had a list of questions, but we never could ask just one of them, because they always started talking right away (laughs).

Which story inspired you the most?

Jale: For us, personally, the story with one couple that lived together and also worked together was really interesting to hear. They got to know each other during work and spent a lot of time together. That was really exciting because we also live and work together. To hear that story, from a couple that already went through everything gave us another view, was really lovely.

You create every piece for womenswear and for menswear. Is that the moment where your work is divided into two parts?

Michele: We actually do everything together…

Jale: If I have something in mind, concerning the men’s section, I ask Michele. Like when it comes to certain colours, for example, if he would say that somebody would wear that colour. Some things I just can’t estimate. As a woman or as a man you prefer something else and this is not always the same. When I really like a fabric at the fair and already imagined thousands of things with it, Michele says, ‘Not at all! This is awful!’ That’s why we do everything together, because at the end, it’s going to be one collection.

Michele: Actually, we always agree on the silhouettes first and then everyone starts on his own and at the end we decide together. But generally we work together all the time. There is no moment where Jale is in one room and I am in another.

Is this a new way of a matching look?

Jale: I guess it could be interesting and exciting when you want to have a show effect or something. For everyday wear I doubt that somebody would go out with his partner in our clothes as a matching look. We want to create a collection together or moreover, we want to create a common collection. We actually like the fact that we can’t do everything. We have to look out if it fits for both gender and won’t look misplaced. We don’t want to put a man in a flouncy dress. That is also a challenge we are working on. We want to have a female and a male look at the same time. It’s important to us that we don’t have one piece of clothes for both gender and you can’t see the differences anymore. Rather we want to bring out these differences, but have one collection at once.

Michele: The design is more or less unisex, but not the profile.

Do you need someone who thinks differently to get new inspirations or is it easier for you to create something with a partner who is on the same level?

Jale: It’s funny. I never thought I would be one of those persons, who gets along so well with someone in such a long time and limited space.

Michele: I don’t know anybody in our private surrounding, who doesn’t question how this is going to work out. Nobody said that out loud, but I guess a lot of friends think so. But it is a great privilege to work with Jale and it works out really good.